Hearing the sounds of bombardment and airstrikes surrounding them is troubling enough for a child. However, for Amin Hammoud, the biggest shock was coming back from school to a demolished home and his distressed neighbours telling him his parents were no longer around.

As he looked over his house, which he had grown up in, reduced to rubble on the ground, he found it difficult to process the information he was being told. He was five.

For a long time, Amin struggled to understand what had happened. His normally outgoing personality became hidden behind feelings of fear and paranoia, with no way of dealing with the trauma of what he had witnessed. He was soon taken into the care of his elderly grandparents, where he lived in Damascus with them for around a year and a half.

As the war ravaged on, and more people were displaced from their homes due to bombing, it was no longer safe for them to continue life on there, and his grandparents took the decision to seek refuge in Lebanon.

At first, Amin and his grandparents settled in a refugee camp in Aarsal where most residents face immensely difficult conditions. In the summer months, temperatures in the tents are scorching, while in the winter, tents often flood and many are not equipped with heaters or blankets. Sourcing food and getting access to proper healthcare and education is also a widespread issue among many that live in camps, due to their refugee status.

Eventually, both Amin and his grandparents moved to the Al Yasmin camp in the Bekaa Valley, and he was soon after able to be sponsored through Africa Muslims Agency (AMA).

With the financial aid from his sponsors, AMA was able to facilitate the rehabilitation of his tent, meaning that he now has a proper room where he can study and rest. His tent has also been equipped with a refrigerator, amongst other key household essentials.

Fatima Kaisi, a project co-ordinator at AMA noted how Amin’s personality has transformed since being sponsored.

“He is so much more confident now,” she says. “He really feels like he has people who care for him, and want to help him achieve his goals and ambitions,” she added.

The sponsorship and financial aid provided for Amin has had a positive outcome, evident in his school results. Some of the subjects he scores highly in include maths, Islamic studies, Arabic and art.

Since having a more stable and secure life in his home now, Amin has also been able to develop new skills and hobbies. The main one being photography.

“I want to be a photographer so I can show the beauty of Syria, and show the people that there is some joy in camps,” he says.

Today, Amin has continued to maintain a positive relationship with his sponsors, and regularly video calls them.

This month, he was able to travel to South Africa for the first time to meet them, who say they are very excited to have him stay with them in person and spend more time with him. 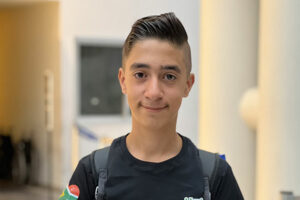 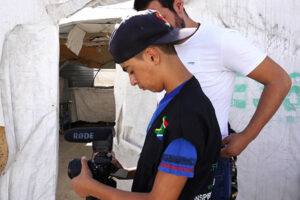 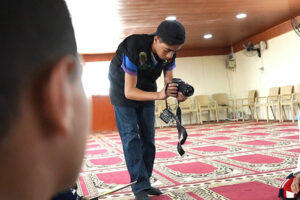 We use cookies on our website to give you the most relevant experience by remembering your preferences and repeat visits. By clicking “Accept All”, you consent to the use of ALL the cookies. However, you may visit "Cookie Settings" to provide a controlled consent.
Cookie SettingsAccept All
Manage consent

This website uses cookies to improve your experience while you navigate through the website. Out of these, the cookies that are categorized as necessary are stored on your browser as they are essential for the working of basic functionalities of the website. We also use third-party cookies that help us analyze and understand how you use this website. These cookies will be stored in your browser only with your consent. You also have the option to opt-out of these cookies. But opting out of some of these cookies may affect your browsing experience.
Necessary Always Enabled
Necessary cookies are absolutely essential for the website to function properly. These cookies ensure basic functionalities and security features of the website, anonymously.
Functional
Functional cookies help to perform certain functionalities like sharing the content of the website on social media platforms, collect feedbacks, and other third-party features.
Performance
Performance cookies are used to understand and analyze the key performance indexes of the website which helps in delivering a better user experience for the visitors.
Analytics
Analytical cookies are used to understand how visitors interact with the website. These cookies help provide information on metrics the number of visitors, bounce rate, traffic source, etc.
Advertisement
Advertisement cookies are used to provide visitors with relevant ads and marketing campaigns. These cookies track visitors across websites and collect information to provide customized ads.
Others
Other uncategorized cookies are those that are being analyzed and have not been classified into a category as yet.
SAVE & ACCEPT
DONATE